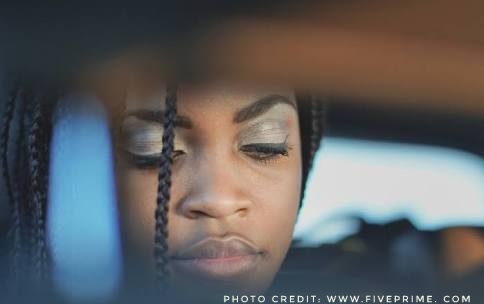 The sun was scotching hot.

I stood aside with my two year old twins and we watched as the Police and Court bailiffs brought out our property one after the other and filled it in their van.

They were executing the judgment of the Court, they would auction off our property to pay the Landlord the two Year rent we owed him.

The pain I felt ripping through my chest was unexplainable. I looked over at my neighbor’s flats, there were three of those in the compound.

One was inactive while the other two had neighbor’s peeping behind their curtains, taking a front row in the arena of my shame..

“Mummy, I want to go inside” One of the twins said, tugging at my arm zealously. The second twin immediately began to cry, demanding to eat the Indomie I was preparing before the bailiffs came for us.

I shut my eye lids and allowed the tears that had been stinging at it’s corner’s to cascade freely.

He patted their heads inattentively and hurried past them to where I was standing.

“Baby…” he started to say, darting his eyes unsteadily at the Court officials. “I got your text.”

I looked bitterly at him with my teary eyes then looked away grudgingly.

He galloped to where the Landlord stood and began to rub his palms together pleadingly. “Oga don’t do this please, give us some little time, we would pay…”

The Landlord eyed him up and down, hissing angrily.

Ifeanyi tried to touch the stout man’s arm in an attempt to further his plea but the Landlord gave him another stern look and yanked his flappy arm away from Ifeanyi’s touch. “Two Years I dashed you,” He gesticulated with his fingers. “Even after the Court gave you time to vacate, you still stayed, you are an ingrate!” He spat!

I bent forward and began picking up our clothes as the bailiffs flung them out. I packed the much I could into two suitcases, wiping at my cheeks with the back of my palm.

I could still hear Ifeanyi begging the Landlord over there. I zipped the bags close and stretched up straight.

“Let’s go” I said to the twins and they began to lag behind me as I strolled towards the gate.

Ifeanyi breezed to my side, collected a suitcase and took hold of one of the girl’s hand.

We matched out of the black gate.

“Wait, let me call Emma” he said to me, causing me to stop walking. I waited as he placed a call to his friend asking him to come to our aid.

“He is coming” he said to me at the end of the call.

“Linda, Lilian!! Come back here” I called to the girls as they began to wander towards the street.

I felt Ifeanyi step besides me, he took my hand and I allowed him only because I was too tired to struggle. “I’m so sorry” He said. “I promise I will get us a better home”

Another promise! He had been making promises since the day we got married, very little of which had come to pass.

I slowly withdrew my hand from his and matched to where the girls lingered. I pulled them back to the sidewalk, holding their hands in place to keep them from wandering off again.

Ifeanyi’s friend arrived half an hour later in his Volkswagen Golf 3, both men shook hands.

I nodded. He picked up the suitcases in both hands, refusing Ifeanyi’s help. He dropped them into his open booth, closed it shut and asked that we get into the car.

The girls ran into the back seat and I joined them. Ifeanyi took the seat in front and Emma began to drive us away from what used to be our home.

Emma lamented about the sorry state of our economy to the quiet nodding of Ifeanyi’s head. He went on to blame the Landlord vehemently for not being a bit more considerate towards us, a speech I knew was meant to massage his friend’s ego and pacify my hurt.

I shifted my gaze to the window, tunning out Emma’s voice and the chattering of the twins.

I reflected soberly to four Years ago when I first told my parent’s that Ifeanyi had asked me to marry him.

My family knew about us from when I was sixteen and Ifeanyi nineteen. We were childhood sweethearts and stayed so to our University and Youth service days.

Everyone who knew us predicted that we would end up together, in fact, they swore upon it! So it did not come as a shock to my parents when I ran home that Saturday evening immediately after the proposal and excitedly informed them of the good news.

My mum jumped with me, and my dad patted my back with a broad grin plastered across his face, they were happy for me.

The next day however, as I sat down to lunch with my family on our dinning table, my father cleared his throat after a glass of water and said, “Chika my daughter, you know we love Ifeanyi, in fact, we’ve watched you two grow up together…”

“I know daddy” I smiled, unsuspecting of what was to come.

“There is no doubt in our minds,” he gestured towards my mother and back to himself “that you two love each other,”

I was still grinning gladly.

“..But you cannot marry Ifeanyi…”

My grin quickly metamorphosed into a frown.

“Not now at least. The both of you only passed out of service last Year, he doesn’t have a job yet and neither do you….”

My father nodded. “Then wait till he gets one”

“What we need is love, money is not the most important factor in a marriage…”

“No” My father remarked. “But it is vital”

I frowned at my aged Father as he went on to give me this speech I really did not need.

“Chika, I know what I went through with your mother in our early days, it was hard…”

“Yes but the journey was tough, and it will even be tougher now because times have changed. Life is much more difficult and items are more expensive than they were in our time”

“Chika, listen to your Father.” My mother said, placing her hand over mine. I had long stopped eating, I was still yet to swallow the meat I had in my mouth, it tasted stale all of a sudden.

“We love Ifeanyi” my Father continued. “But let the young man get a source of income first, and you do so too. That way, he can be able to take care of you and you on your part, would be able to assist him.”

“Life can be very difficult without a steady income Chika, you may not understand that now because your father and I give you all you need, but when you and Ifeanyi are out there on your own, with no source of income to meet your daily needs, this love you so strongly profess will be shaken”

I  swallowed my meat hard and sprung to my feet. “God forbid mummy! Nothing can shake our love!” I declared and ran off to my room in tears.

****
My parents stood their ground.

There was no way we were going to get married without their blessings, so when we saw that they were not going to bulge until Ifeanyi at least secured a job, I deliberately took in and refused to terminate it.

I left my parents no option than to allow us get married.

They grimly put together our wedding and helped us settle into a two bedroom apartment almost immediately.

I was heavy so I couldn’t look.

He searched and searched but nothing was coming up.

Eventually, he got tired of looking for a white collar job and decided to try his hands at different things, hustling here and there.

Sometimes he would bring home some money, other days there would be nothing. We were forced to depend on our families to get us through most days.

He didn’t like that I had to run to my family for help, but we could not solely depend on his parents who were aged and didn’t have much themselves, his mother was already sharing sales from her petty trading with us, and that didn’t cover much so I had to look to my parents for extras.

It was a hard adjustment for me, I went from having everything I ever wanted to managing bits of what we got. And every time I had to make that call home, I cringed in shame.

Ifeanyi didn’t like it either, but it was our only way.

The twins came and things got worse. We needed money for diapers, baby food and much more. It was hard.

My father retired from his job and I couldn’t really go to him for help anymore.

Ifeanyi and I struggled, we lived from hand to mouth everyday of our lives. I became withdrawn and he became impatient and temperamental.

It was almost unbelievable how much the stress of marriage weighed us down and pulled us apart. We who used to laugh so much and wallow in each other’s company became so distant.

As soon as the twins clocked four Months, I found a secretarial job and Ifeanyi was able to get a dry cleaning shop right after wards.

We worked hard day and night. Money began to come in but it was never enough to meet all our needs and wants.

I got a second job to compliment, teaching home lessons for kids every day after work.

My sex drive deflated to zero. I was too tired all of the time, and sad. I felt bad that I was starving him and I really wanted to give in, and I did, sometimes, but I would always be so dry.

The hormones couldn’t be fooled.

Life moved so fast, it was hard to stop for a moment and just breath. I was constantly thinking of ways to earn more and manage the little we have.

The frustration of our finances got to us so much that we had frequent quarrels, eventually, I got too tired to fight and hastened to make peace every time a disagreement ensued – I figured we should at least have some peace even though we didn’t have money.

I forgot what it meant to laugh straight from the heart. When a song came on on the stereo, I didn’t even feel the desire to dance. I just stopped feeling, I was so drained.

I would snap at my kids so often and regret it afterwards, but because I was frustrated, it didn’t stay long before they did something that irritated me and I snapped again!

I would look at my children and feel sorry for taking it out on them and at the same time, hurt that i couldn’t give them the kind of life I had growing up.

My dad was right, love is not enough for a marriage because love cannot put food on your table, love cannot pay the bills, love cannot cloth your children, love cannot buy medication ..a lesson I learnt a little too late…

“Mummy! Mummy!” Linda shook me out of my absent mindedness.

I exhaled deeply, turning to her.

“Sorry o?!” I consoled, pulling her closer to my side.

I looked around and realized I didn’t know where we were headed, I hadn’t asked.

“Where are we going to?” I asked to Ifenayi’s hearing.

“My mother’s house” he said.

I dropped my head backwards and bit my lower lip in frustration.

It just keeps getting worse.

7 thoughts on “LOVE IS NOT ENOUGH.”